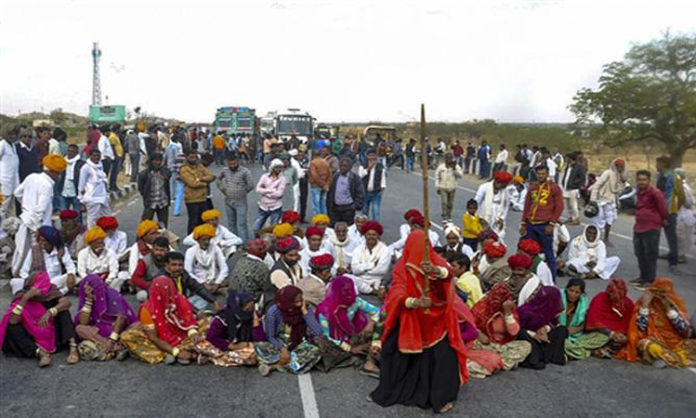 Their protest had turned violent on Sunday when shots were fired and police vehicles torched in Dholpur district, forcing authorities to impose prohibitory orders under Section 144 of the CrPC in Dholpur and Karauli districts. It still remains in force in the areas.

On Monday, the agitators blocked NH 11 and continued their blockade from previous days at other places. Since the agitation began on Friday, it has affected the movement of more than 250 trains.

“NH 11 was blocked at Sikandara in Dausa. A state highway was blocked in Bundi district’s Nainwa on Sunday and Malarna road in Sawai Madhopur and Karauli-Hindaun road at Budla village in Karauli have also been blocked,” DGP, Law and Order, ML Lathar, said.

Dausa SP Prahlad Singh said vehicles heading towards the blockade area on the national highway were diverted to alternative routes.

“The traffic is being diverted and things are under control. The blockade is peaceful,” the SP said. He said efforts were being made to clear the blockade.

As of now, one national highway, one state highway and two arterial roads and Delhi-Mumbai railway tracks are blocked in Rajasthan, leading to cancellation and diversion of several trains.

The North Western Railway in a bulletin said four trains had to be diverted on Monday.

Gujjar agitation leader Kirori Singh Bainsla and his supporters began their sit-in on railway tracks in Malarna Dungar of Swai Madhopur on Friday.

Bainsla is demanding 5 per cent quota for Gujjar, Raika-Rebari, Gadia Luhar, Banjara and Gadaria communities in jobs and education and has refused to clear the railway tracks.

“We will not move from the tracks if the announcement is not made. There is only one demand and that is 5 per cent reservation,” Bainsla’s son Vijay Singh said.

A state government delegation, including Tourism Minister Vishvendra Singh and IAS officer Neeraj K Pawan, held talks with the protesters on Saturday but they refused to end their agitation until their demand is met through an official announcement. PTI