Lucknow, September 20: After dragging its feet for days, the SIT on Friday finally arrested three-time BJP MP and union minister in the Atal Behari Vajpayee government, Swami Chinmayanand, on charges of rape.

The SIT team led by IG Naveen Arora, and accompanied by a large posse of police arrived at the rape accused Swami’s Shahjahanpur ashram.

To prevent any resistance the SIT had taken a large number of police personnel with them.

Picking him up from his ashram, the SIT team reached the Kotwali police station.

From there, Chinmayanand was sent to a hospital for medical examination. He would be thoroughly examined before being presented before the court later in the day.

23-year-old law student from Swami Shukdevanand Post Graduate College had complained of 72-year-old Chinmayanand raping and sexually exploiting her for a year.

He is the president of the college where she was studying.

The law student hit headlines on August 24 when she disappeared after posting a video on the social media about an influential person sexually exploiting her.

In the video, she had not named anyone. But the missing person complaint filed by her father mentioned Swami Chinmayanand.

On the basis of the father’s complaint, the Uttar Pradesh police booked Chinmayanand on charges of kidnapping on August 27. Finally, on August 30 she was traced in Rajasthan.

After this, on the directions of the Supreme Court, the Uttar Pradesh government constituted a SIT headed by IG Naveen Arora.

The Supreme Court had also ordered the transfer of the student and her brother to other law colleges saying it was important for their future.

However, despite the complainant recording her statement in court under Section 164 CrPc on September 16, the police did not arrest the rape accused, who complaining of chest pain has been in and out of hospital from that day onwards.

Finally, the police arrested him when the complainant threatened to commit suicide if she did not get justice. 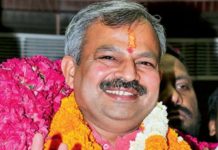 India will definitely get its economic growth back: Modi

Cabinet approves increase of MSP for 14 kharif crops; farmers to get 50-83% more than input cost

Kejriwal seals Delhi’s borders for a week, but allows shops to open