Islamabad, August 23: Pakistan on Friday said that despite tensions with India, it stands ready to open the Kartarpur Corridor and welcome the Sikh pilgrims to take part in celebrations in connection with the 550th birth anniversary of Guru Nanak.

Foreign Minister Shah Mehmood Qureshi said this while speaking to a delegation of civil society and parliamentarians of Afghanistan, which is currently visiting Pakistan for the ‘Track-II dialogue, Beyond Boundaries’.

Tension between India and Pakistan has escalated after New Delhi revoked Article 370 of the Constitution which gave special status to Jammu and Kashmir and bifurcated the state into two Union Territories on August 5.

“Despite our tensions with India, we have decided go ahead with Kartarpur Corridor and we stand ready to welcome the Sikh pilgrims for the 550th anniversary of Baba Guru Nanak,” Qureshi told the delegation.

The Kartarpur corridor will connect Darbar Sahib in Pakistan’s Kartarpur with Dera Baba Nanak shrine in Gurdaspur district and facilitate visa-free movement of Indian Sikh pilgrims, who will have to just obtain a permit to visit Kartarpur Sahib, which was established in 1522 by Guru Nanak Dev.

Pakistan is building the corridor from the Indian border to the Gurdwara Darbar Sahib while the other part from Dera Baba Nanak up to the border will be constructed by India.

Qureshi also told the delegation that current tension with India will not affect Pakistan’s relationship with Afghanistan.

“Border (with Afghanistan) will not be closed nor trade will stop. Why should Afghans suffer because of the idiosyncratic behaviour of Narendra Modi,” Qureshi was quoted as saying.

“Despite tensions with India, Pakistan is totally focused on the situation and its role in Afghanistan. It (Kashmir situation) can be a huge distraction but we are very clear what we need to do in Afghanistan,” he added while responding to a question if escalation of tension with India can distract Pakistan.

Qureshi said that Pakistan did not believe in any strategic depth. “We want good neighbourly relations with Afghanistan and peaceful co-existence. We have no favourites in the upcoming election. It is not our business who governs Afghanistan. We will not interfere. Whoever you [Afghanistan] will choose, we will work with them.”

The foreign minister emphasised that honesty was the best way forward between the two countries. “It is foolish to think we can trick each other,” he said, adding that blaming each other was not an option.

“Accusatory statements will not help each other.”

He also said that “we do not want Talibanisation of any region but they [Taliban] are Afghans and they are a reality”.

He added: “We will also support intra-Afghan dialogue. The process has to be “Afghan-owned and Afghan-led.”   Qureshi told the delegation that he had invited the foreign ministers of Afghanistan’s and China for a trilateral meeting. The foreign minister will come to Pakistan in the first week of September for the talks, he added.—PTI 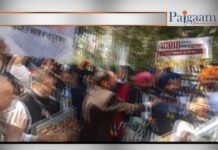