Chandigarh, May 13 :A polling agent in Faridabad was arrested after a video of him allegedly trying to influence voters in the sixth round of the general election went viral on social media.

Faridabad voted in the sixth phase of the general election on May 12.The action was taken against the official after the video on Twitter was brought to the notice of the Haryana election body. Election Commissioner Ashok Lavasa confirmed that the polling agent was arrested on Sunday afternoon.

In the video, the polling agent is wearing a blue T-shirt and can be seen walking up to the polling booth as a woman prepares to cast her vote. He appears to press a button on the EVM or pointing to a party symbol and then promptly returns to his seat.

The man repeats the act with two other women voters. Several people tagged the Election Commission seeking action against him.

“DEO Faridabad reported that the observer, Sanjay Kumar investigated the entire matter. The person in the video is the polling agent who has been arrested in the afternoon itself. FIR is lodged,” Lavasa tweeted.

The Election Commission said it would study the report of the Faridabad election before deciding the further course of action.

Ten seats in Haryana voted on Sunday in the sixth phase of the Lok Sabha elections.

The district recorded a 64.46 per cent turnout. 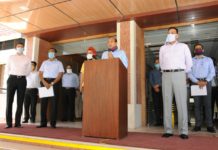