Home Editorial AFTER 70 YEARS AND 12 TOURS, IT’S NOW OR NEVER FOR INDIA...

‌It was a historic moment when India toured  Australia for the first time in 1947- 48  to play a 5 match test series loosing 4 and managing to draw one, as it was the first time a team was to represent India after independence.
The current tour happens to be India’s 12th tour since then and if cricketing gods don’t act funny, this series too can prove to be a historic one. India has never won a test series in the previous 11 attempts and this is arguably the weakest team that will be wearing the cricket Australia greens.

Looking at the two teams , Australia is going through a tumultuous phase since the ball tampering incident during the third test match played between Australia and South Africa in Cape Town which resulted in Captain Steve Smith, David Warner and Cameron Bancroft receiving unprecedented sanctions from Cricket Australia.

Smith and Warner will not be able to join the team till March 2019 and these two batsmen have been scoring more than 50% of their teams runs, thus reducing the batting prowess of team Australia by half.
Australia is struggling in batting department and struggling badly without it’s two star batsmen. In the bowling department, Australia still has a very potent attack in the form of fast bowlers but there is a sameness about them.
The other chink in the armour is lack of a quality spin bowler other than Nathan Lyon.

Cricketing greats, comentators and experts agree that Australia  has one the best bowling attacks but let’s give you an alternate view . The current bowling attack is good but it is not going to trouble Indian batting order instead it is going to help their batting style. Even and true bounce , ball skidding to the bat is going to help Indian stroke makers, particularly Virat Kohli , KL Rahul and Rohit Sharma .

What adds is that Australian pitches are not the same old pacy pitches now and have slowed down considerably over the years.They do not possess the same pace or bounce  in them that can trouble Indian batsmen. Thes pitches are now pretty much similar to Indian pitches.
Three venues out of the four, drop-in pitches are going to  be used  which should ideally negate the home pitch advantage  to a larger degree. Barring M. Stark, the rest of the bowlers don’t seem to have the kind of special or extraordinary skill , that X-factor, required to trouble the Indian batting line up.

And without getting into the technical aspect of his rist position,  Stark too has lost the delivery that leaves a left hander and comes in to a right hander , thus reducing him to unidirectional bowler. We will discuss his rist position and the consequent loss of this delivery in coming articles.
Another factor, kookaburra balls swing for the first 10 to 15 overs only and then batting becomes easy till the ball starts reversing after 45 – 50 overs. Here too India has an edge, while only Stark can swing the new ball and no one can reverse the ball for Australia, every Indian bowler can swing it , and swing it both ways , and swing the new ball as well as the old one.

In spin department , there is no comparison, even though Ashwin has not been veey successful abroad but looking at his bowling action now , he has made adjustments and a few slight changes which should work out for him and the first test has given us the glimpses of that.

Now that India has already created a history of sorts by winning the first test match of a series for the first time in Australia, it’s now or never for team blue. If it does not win the series this time , then probably it never will in future too.
And all depends on the batting prowess of one man, no not Kohli but let us awaken you to an alternate fact on this one too.
Kohli is a master batsman, best for sure , but only in one day format. When it comes to test matches , it’s only one man , Pujara . How he bats  will decide the outcome of this series. And it’s not him having to score the centuries every time, even when he makes 15- 20 runs he plays 70 to 80 deliveries , which means by the time Kohli and the rest come to bat, the ball is 20 odd overs old and has stopped swinging making life that much easier on the crease. That is  what makes Pujara important, as Kohli’s batting too depends heavily on Pujara’s batting. A perusal of Kohli’s scores with Pujara’s contribution and without contribution might shock you. Give it a try.
Up by 1-0 , and Australia loosing the advantage of batting first  in the second , we are half through the door, one more push and India is through. Fingers crossed.

(  Author of this piece can be reached on theowl@paigaam.in ) 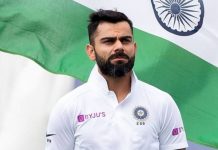