Jammu, January 10: A delegation of All J&K Plus-2 Lecturers’ Forum led by its President Deepak Sharma called on Commissioner Secretary to Government, School Education Department J&K, Sh. Hirdesh Kumar and welcomed him on taking over the reins of the department and submitted a memorandum of demands and issues pertaining to Plus-2 Cadre. Deepak Sharma apprised Worthy Secretary that Plus-2 community has suffered a lot due to long and worst type of stagnation in the absence of Running Grade/Time Bound Promotion which otherwise is being enjoyed by their all Gazetted counterparts working in pre-revised scale of 8000-13500/5400 GP/Level-9 and they have to stagnate for a long period of about 20 years before being promoted as Principal with a meager enhancement of Rs. 200 in Grade Pay and once again they have been discriminated as only Plus-2 Lecturers have been left out from the ambit of Assured Career Progression Scheme (ACPS), though almost all Gazetted Officers appointed in the same  scale/level have been covered under ACP and further urged the Secretary to use his good office to accord sanction to Time Bound Promotion/ACP in favour of Plus-2 Cadre i.e. 3 Time Bound Promotions from Level-9/5400 Grade Pay to Level-13/8700 Grade Pay within a time span of 20 years.

The delegation also demanded expediting of process of Regularization of All Incharge Officers of Education Department and release of Promotion lists of Joint Directors, CEOs and equivalents, Principals and equivalents and Senior Lecturers as per 1/3rd cadre strength of Lecturers at the earliest for the smooth functioning of department and in the interest of teaching learning process.

Delegation also demanded Revocation of SRO-202 for all Cadres including Plus-2 Lecturers and redrawing of hard zone areas and fixture of tenure of one year on the analogy of Ladakh region as policy of newly appointed employees from RBA/ALC region for 7 years and SRO-202 for 5 years has miserably failed and instead a rational transfer policy should be framed and implemented to address the needs of Government Schools in hard and far flung areas.

Other demands included Non-vacational status to Principals/Head of the Institutions, Provision on earned leave in favour of Teaching faculty of School Education Department, Revival of 40% in-service College Quota, Removal of Pay anomalies and Regularization of Physical Education Lecturers. The Secretary gave a patient hearing to the delegation and assured to redress their demands in a Time Bound Manner. 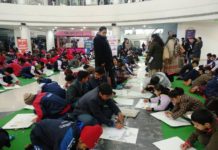